Are you signed up for the Scrap Bag Swap yet?  It should be lots of fun playing with someone else's scraps and seeing what new combos you can come up with using your own stash.

Here's an idea for what you might like to package your scraps in, but really this type of bag has a zillion uses* and in truth there are probably a zillion tutorials on how to make one. 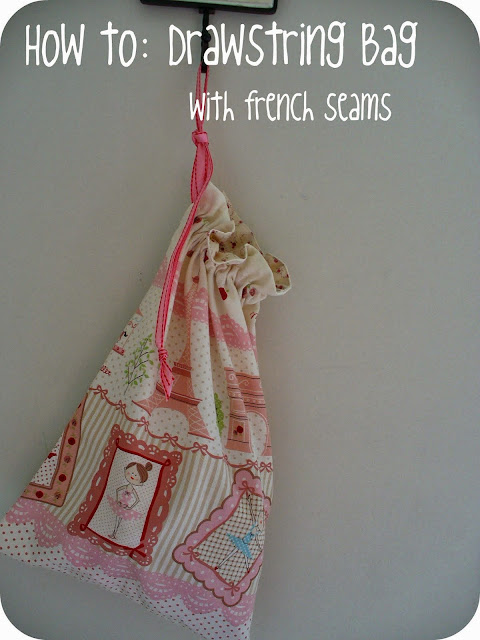 This is my take, and true to my style - I wanted to use up a scrap of contrast fabric around the top - I think that looks really sweet.  Also like it when the inside is finished just as neatly as the outside, so this won't be the easiest tutorial ever - I'm assuming your reasonably confident on your machine!  If you haven't ever tried french seams they aren't as tricky as you might think and they look super professional.

I've mentioned the specific measurements for this bag, but really you can scale this up and down as you need.

So I started with a fat quarter, washed and pressed in half (so that I could have this border print fabric running around the bottom) - you probably won't be using a boarder print, so it doesn't matter which way you fold it.  I decided the bag looked a bit tall and narrow for what I needed here - its just a proportion thing, I eyed it up and decided to cut off  7 1/2' (19cm) off the top edge.  I also neatened up the slightly frayed edges with my rotary cutter and quilter's ruler.  The contrast fabric is the same length as the top of the bag and around 21/4' (5.7cm) wide - that was what I had so that's what it ended up being.  You could vary that if you wanted (make it wider or narrower depending on the width of your drawstring) or just add this width measurement to the total height of the bag, so instead of having a contrast panel on the inside you fold over the main fabric and stitch it down.  Follow me? 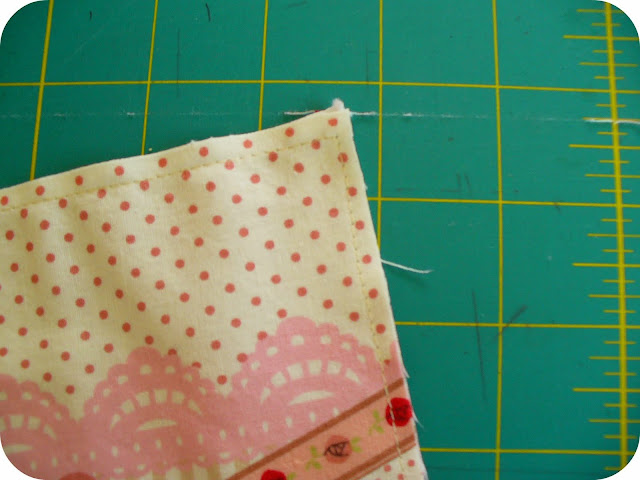 Now you're ready to sew:  Start with the bag folded, right sides out and sew a 5mm seam.  Stop 6cm before the top edge.  Press the seam, turn inside out and press again.  Now sew a 1cm seam, encasing the raw edges from the first seam you sewed.  Again stop 6cm before you get to the top. 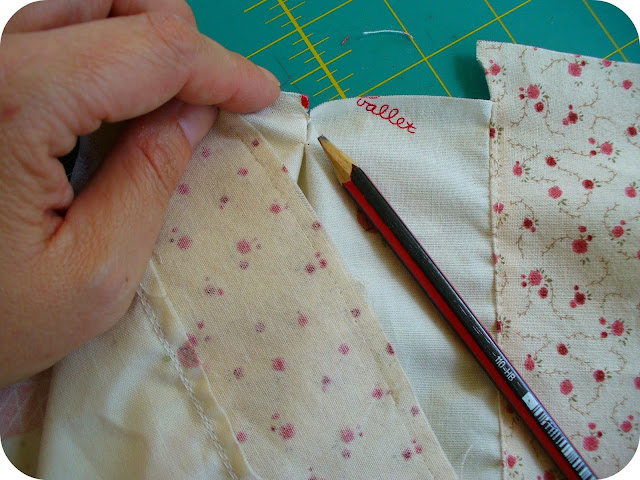 See where the pencil is pointing?  This is the french seam you've just made, you'll need to clip the seam allowance here and fold it out (its folded out in the picture) 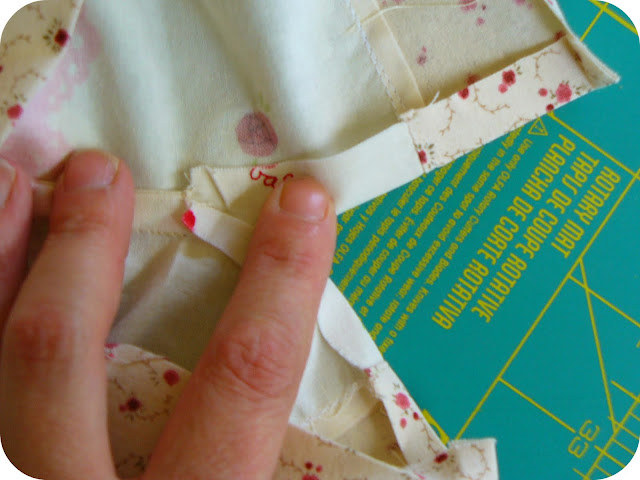 Here is another view of the clipped area.  Press the french seam to one side (either side is fine), the allowance above the french seam should be 1.5 cm.  Also press down a 5mm seam allowance along the contrast band (you can see that in the top of the picture).  Now, because you have a decent 1.5 seam allowance you should be able to fold 5-7mm of the allowance under and sew from the top edge of the contrast band down to the point where you clipped the seam.  Keep the needle down, lift your foot and pivot your work so you can sew up the other side, turning under 5-7mm of the seam as you go. 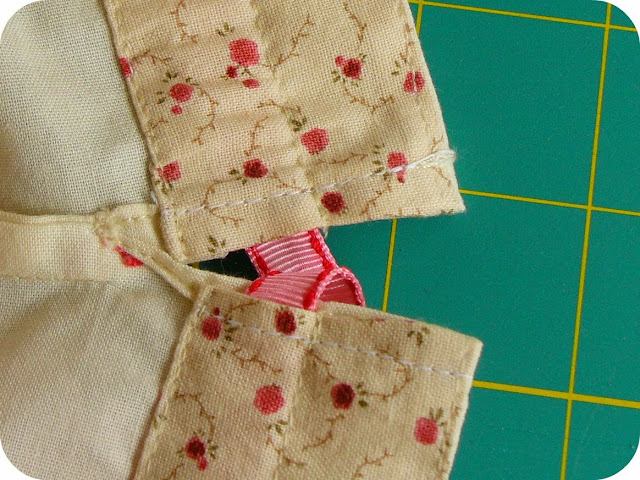 Note: my first picture didn't turn out, so I've rephotographed the completed bag - you won't have the ribbon in or the channel made for the ribbon just yet. 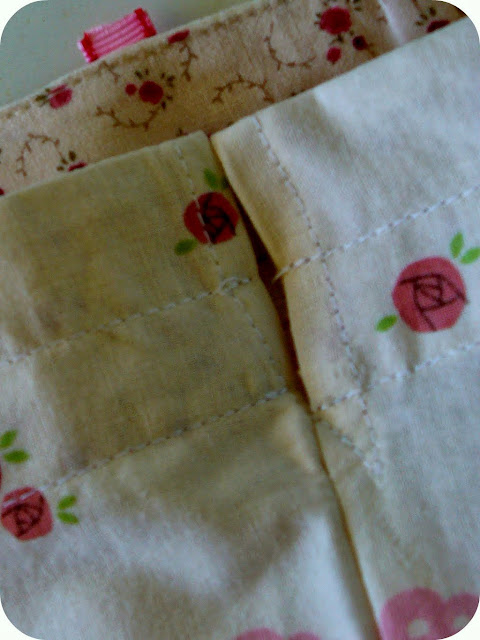 Again - you can just see what the stitching should look like on the outside of the bag. 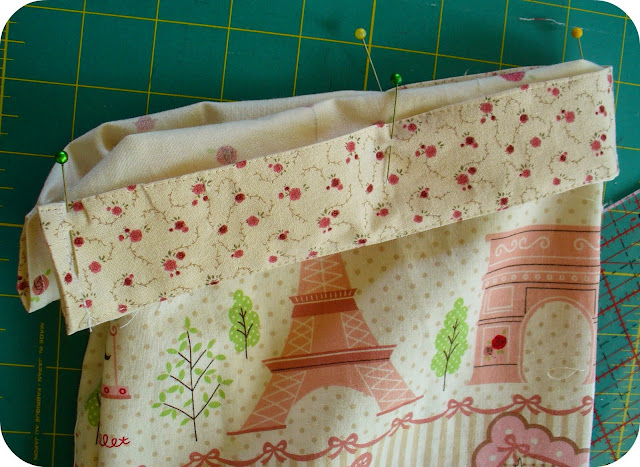 Home stretch - pin and sew the contrast band really close to the edge.  Then get your ribbon and decide how big to make the channel.  A good rule of thumb is to make it twice the width of the ribbon.  You could draw yourself a guideline with removable marker or chalk, but I just free-styled it using the marking on my machine's footplate to help. 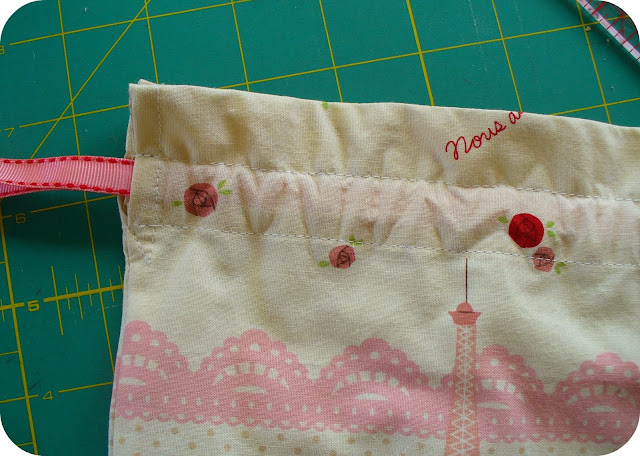 Pop the ribbon in with the aid of a safety pin and you're done.

Email ThisBlogThis!Share to TwitterShare to FacebookShare to Pinterest
Labels: Kids Project, My creative space, scrap bag swap 2012, Tutorial, whats up at my house